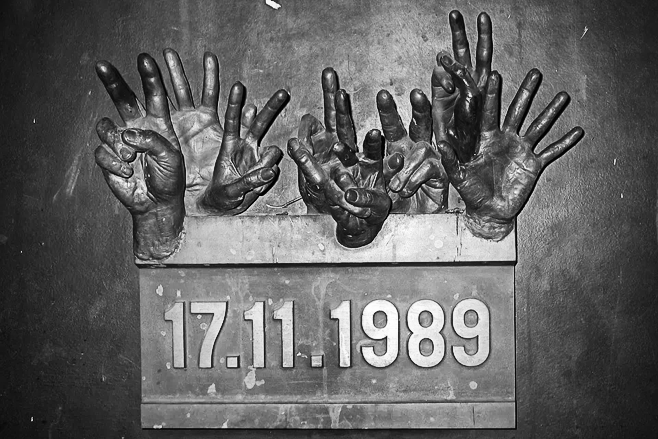 The Threat to Democracy Thirty Years after the Velvet Revolution

12. 11. 2019 Author: Michal Klíma This year – not only in the Czech Republic – we mark the passage of 30 years since the fall of the Iron Curtain, the demolition of the Berlin Wall and the collapse of the totalitarian communist system. At that time the countries of the Soviet Bloc had barbed wire borders, and anyone attempting to escape to the free world was shot at. In 1989, at the beginning of those dramatic changes, a universal optimism reigned. People were suddenly able to travel and study freely, and to read whichever books they wanted. The leading political scientist Francis Fukuyama wrote of the triumph of democracy and the end of history.

However, the reality was more complicated. There was no automatic progressive development from totalitarianism to democracy. On the contrary, in many countries of post-Soviet Eurasia a gradual return of dictatorships took place. And in some of the countries of Central Europe there has also been an erosion of democracy taking place in the last decade.

Where are we to seek the causes of this development? Above all, the transition from totalitarian communism to democracy required a complex manoeuvre on the part of society, one that was unparalleled in terms of its complexity and which could not be tested under laboratory conditions. After the sudden collapse of the system it was necessary to embark simultaneously upon a triple transformation. Firstly, to build a new state identity – following the disintegration of Czechoslovakia, Yugoslavia and the Soviet Union. Secondly, to introduce a new constitution, thus to establish democratic institutions and a legal order. And thirdly, to move from a system of state planning to a market economy by means of the privatisation of state enterprises.

Within a historically short moment, we witnessed an unprecedented transfer of state assets into predominantly private hands. All took place within the environment of an absence of the rule of law. There was no functional administration, police and judiciary, or the relevant laws. A condition of a kind of “twilight” came into being, since in the transfer of extensive state assets no sufficient barriers were set up as protection against predatory behaviour. As a consequence of this there was an eruption of corruption, clientelism and organised crime.

As a result, after the year 2000 economists and political scientists began to investigate the new phenomenon of “state capture”. This related to a unique period of plundering, a kind of Klondike gold rush, in which a massive accumulation of property and wealth took place within a brief moment in time. A process which in other countries had developed naturally over the course of centuries took place within a mere 10 to 15 years in the countries of the former Soviet Bloc. It was no surprise that the parcelling up of state assets was preyed upon by various parasites in the form of post-revolutionary bosses, godfathers and oligarchs, who were connected to corrupt structures in certain political parties.

Cheating as the most advantageous option

The atmosphere of the time was appositely described by Professor Václav Rajlich, applying game theory as follows: “Under certain circumstances, the most advantageous option is simply to cheat the opponent. After a number of such cheats, the system can easily degenerate into a destructive race. The standard of behaviour is continually lowered, everyone tries to cheat everyone else, worse and worse methods are used, and only the least scrupulous prevail.” He considers a bad system to be one in which “the dubious winners are rewarded for playing dirty,” thus for breaking written and moral rules.

In the public arena today, these “dubious winners” are attempting ever more to usurp power and dismantle the system of checks and balances. Not only do they not abide by the basic law of the land, namely the constitution, but they attempt to subjugate to themselves the courts, state prosecution service, police and media. By doing so they undermine the legal order, as well as the principle of equality before the law. Such an environment provides a natural home for politicians with authoritarian tendencies, who are better able to succeed in their capriciousness, manipulation and disinformation.

What is the way out of all this? How, after 30 years, are we to stabilise our fragile democracy? Here we can perhaps take inspiration from the hypothesis of the sociologist Ralf Dahrendorf, who formulated three fundamental milestones on the road to ensuring a stable democracy and freedom. Specifically he outlined this temporal map: (1) First of all the establishment of a new constitution takes at least 6 months; (2) it then takes at least 6 years before people begin to feel the benefits of economic reform; (3) but it takes at least 60 years to provide the social foundations of every democracy, and thus an authentic civil society. It is only when this third condition is fulfilled that the constitutional and economic reforms will function not only in fair weather, but will be capable of withstanding storms from within and without.

In Dahrendorf’s conception, civil society is formed by a dense network of civic organisations, which has not one but a thousand centres, and can therefore not easily be destroyed by monopolists from the ranks of political parties, the government or the president’s office. Only an active and educated civil society can fill the gap or gulf between the people and the state. By contrast, the ideal of authoritarians and non-transparent parasitic groups is an apathetic and servile people.

We are entering the fourth decade of post-communism, which is distinguished by increased domestic and international turbulence. It is clear that the activity of civil society cannot replace elections and political parties or movements. Nonetheless, it may operate throughout the entire term of office of politicians as a correction and prevention against their capriciousness, against their failure to respect laws and moral values. As a result it is desirable to generate civic pressure in order to attain these goals: to prevent the drainage of public resources, to ensure adherence to constitutional rules; to respect the independence of the judiciary and public media; to depoliticise the work of the public prosecution service.

If civil society remains inactive, we shall have no certainty that we will not sooner or later be brutally beaten by policemen in helmets, as is a regular occurrence today in authoritarian countries, and which last occurred in Czechoslovakia precisely 30 years ago – in November 1989.