Úvod Rubriky Aktuálně You Better Watch out, Čert is Coming to Town 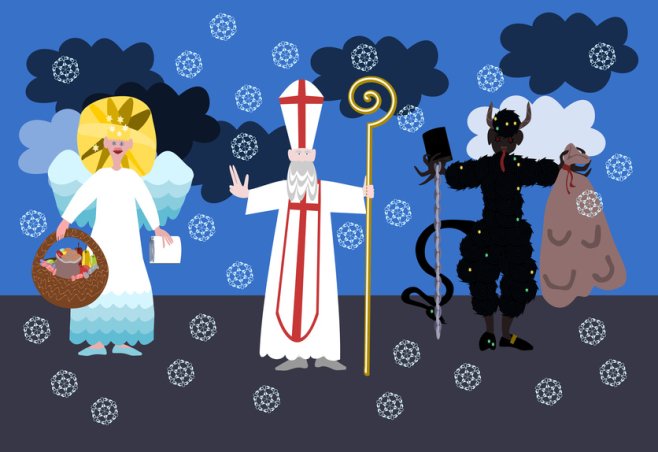 You Better Watch out, Čert is Coming to Town

5. 12. 2014 Author: Damien Galeone One of my favorite days of the year is approaching: December 5th, St. Mikuláš Day. Now, as I understand it, on the night before, St. Mikuláš walks around and interrogates children about their behavior during the past year. If the kids have been good, then one of Mikuláš’ assistants – an angel – treats them to sweets, nuts, or potatoes.

The bad ones get a scolding and some coal from Mikuláš.

The really bad ones get Čert.

If you aren’t Czech or have never been naughty enough to meet him, Čert is the Slavic demon that joins Mikuláš on December 5th. If kids are really bad, he kidnaps them and brings them back to his lair in Hell. He carries a whip and gets fed booze throughout the night, which surely makes him more mild-mannered and pleasant.

There is nothing about Čert that I don’t love. He is a big, hairy beast with horns and a disturbingly long tongue (imagine Miley Cyrus with more muscles but less twerking). In more remote villages, he is sometimes joined by his colleague, an antlered wild man. Sometimes he steals big-breasted ladies. Sometimes he has one human foot and one cloven hoof. Sometimes he is cuter and less threatening. Though he is Slavic, Čert has a counterpart in many cultures. For example, Krampus joins St. Nicholas on his interrogative rounds in Germany. But alas, there is no American Čert.

Mikuláš Day is a fascinating and unusual tradition, and I am completely jealous of it. By comparison, the American Christmas season is completely lacking in demons and devils. We have an old man who dresses in red, hangs out with elves, and brings us electronics. I guess that’s nice, but Santa doesn’t carry the same level of authority as, say, a demon with horns and a giant tongue. When I was very bad as a child, I was told I would get coal. If Czech children are very bad, they get dragged off to hell. Now, you tell me which threat is going to be more effective in thwarting naughty behavior. If Čert had been in America when I was a kid, my parents would have had a much easier time with me.

Let’s be honest, the Czechs have got this holiday perfectly right. The Christmas season definitely needs a devil. Additionally, we all know that nothing rings in the holidays like the prospect of children getting dragged to Hell. When I started that sentence, it was ironic. But now, thinking of my morning class, I think I might wear my Čert outfit.

I don’t have enough potatoes for everyone.