Úvod Rubriky Aktuálně Once and For All: Strategies to End the Scourge of the Islamic State 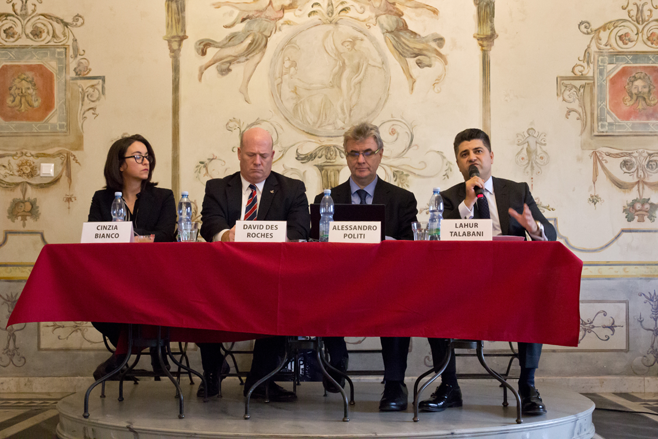 Once and For All: Strategies to End the Scourge of the Islamic State

7. 11. 2018 Autor: Oldřich Bureš The Center for Security Studies, in cooperation with The Euro-Gulf Information Centre and PERICULUM, Charles University jointly organised an international conference "Once and For All: Strategies to End the Scourge of the Islamic State."

Experts on terrorism and radicalisation, military strategists and policymakers discussed ideas to the question of the Islamic State, which has shown a remarkable ability to recruit new members and strike at the heart of Europe, although in the Middle East it is losing one fight after another. Among others, the speakers’ list included: Tomas Zdechovsky (Czech Member of the European Parliament) and Lahur Talabany (Director of Zanyari Agency, Kurdish Military Intelligence agency in Iraq).

This event was held in English on November 2, 2018 in Martinicky Palac. It was attended by a diverse audience of more than 100 people, including diplomats, security scholars and practitioners, as well as students. The conference followed two public seminars organized at Metropolitan University Prague on October 31, 2018 and at Charles University, on November 1, 2018. These events offered an opportunity for students to engage in discussion two of the conference speakers: David Des Roches (National Defence University, Washington DC, USA) and Rachel Bryson (Tony Blair Institute for Global Change, London UK).