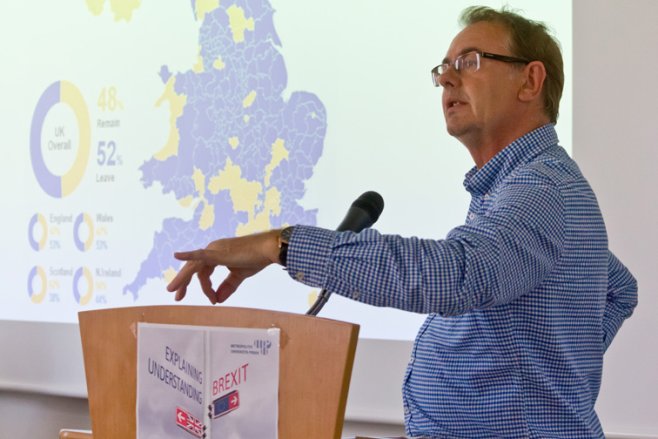 22. 6. 2017 Author: Šárka Kolmašová After a turbulent prelude in the United Kingdom, the negotiations on Brexit officially started on 19 June. On the very same day, the Department of International Relations and European Studies (IRES) launched a 3-day course with an ambitious mission — Explaining and Understanding Brexit. The timing could not have been better. The recent UK election and the EU-UK negotiations ensured that the room was full; as the audience listened to, and bounced questions off, the collection of speakers. What ensued was a vivid discussion, literally, in each session.

Change and opportunity — key terms resonating strongly in the reflections on Brexit and its various implications. After welcome speeches delivered by Marek Beneš (Director of the University), and Mats Braun and Mitchell Belfer (from the IRES Department), the former Ambassador of Czech Republic to Russia, USA and Ireland, Petr Kolář, kicked off the opening with the first round of critical remarks. Who will benefit from Brexit? According to him, mainly lawyers, anti-EU isolationists and Russia. At the same time, he viewed the whole process as a wake-up call for Europe.

The first block, which aimed to introduce What is Brexit, was ‘mission complete’ since both speakers managed to reflect on the essentials in a truly engaging spirit, while providing a balanced UK vs Czech/European view of the major changes that can be expected. Keith Boyfield (Centre for Policy Studies, UK) argued that fear and greed were the main driving forces behind the unexpected voting results. Keith was sceptical of Theresa May and - much to the audience’s amusement - when comparing her to damaged goods suggested that she was “in office not in power”. The former State Secretary for European Affairs (CZ), Tomáš Prouza, delivered no less of an engaging presentation with an insider insight in the EU negotiations and more emphasis on the member states’ positions, in particular the one adopted by the Czech Republic. He summed up the CR-UK future relations by an honest confession: “we love the British, but the decision to leave will inevitably lead to reciprocity”.

The second day commenced with a very honourable guest and one of the decision-makers holding the wheel of the upcoming Brexit process, Graham Brady, Chair of the 1922 Committee of the House of Commons (UK). He has put the current crisis in a historical context of UK-EU relations arguing the British position was consistently against deeper political integration, while prioritising trade relations. The strive for more independence was a logical response to the ongoing pushes for further federalization, rather than simple manifestation of populism. His counterpart on the panel - and a distinctive representative of the Czech media sphere – Jan Macháček, quite openly disagreed with those rationales for disintegration, while emphasizing the shared European values and common interests. At the same time, he saw the decision of the UK as an opportunity to rethink the integration process and push factor to educate more the public.

Participants, craving more hard data and economic indicators, were satisfied by the follow up block on Economic Implications. The Managing Editor of World Economics (UK), Brian Sturgess, introduced the three scenarios of Brexit through the Goldilocks and three bears metaphor, wondering what was the “just right porridge” for the UK. Criticizing the current instability of the Eurozone, his forecast was a stagnation of the euro eventually its total collapse. Oldřich Dědek from the Bank Board of the Czech National Bank referred to his academic background and dusted off the classical macro-economic models through the challenging Brexit case-study with a more sanguine view of future EU x UK economic cooperation.

On the final day, the morning session moved the debate to Security Implications. In her presentation, Patrycja Rozbicka from Aston University (UK) concentrated on the EU energy-security and organized crime issues. While still using the careful phrase “if the UK leaves the EU”, she warned from potential negative impact on joint intelligence projects and police cooperation. Mark Galeotti from the Institute of International Relations (CZ) focused more on military deployment capability and its setback as a consequence of the UK retreat from EU military operations. While considering the debate on hard vs. soft in the field of security and defence policy simply irrelevant, he argued that in many areas including counter-terrorism, European cooperation would be continuously working through NATO and the vast set of existing bilateral agreements.

The course was completed by a block entitled Brexit and You. The first guest, social historian and broadcaster, Richard Weight, firstly clarified the demographic aspects of the voting results, arguing there was a nostalgia for the British imperialism and thus, also, independence prevailing by the older generation. The rest of the British population became more culturally European thanks to “easyjet tourism” and travelling in more general. Then Patrycja delivered her second presentation this time on cultural aspects and, encouraged by moderator Gerald Power, to “be Adele and sing it”. Although not singing, she looked into the live music shows being attended by a significant 38% of tourists in 2015. Although having other important responsibilities as being freshly appointed a State Secretary for European Affairs, Aleš Chmelař arrived directly from a press conference for the last part. Jumping directly to the core issues, he argued that worker’s rights, and in particular the social- and health insurance for EU citizens coming to UK will be the most complicated part of the bargaining process.

After two relatively relaxing reviews of the cultural aspects, we were reminded of the serious implications Brexit would have for literally all of us, no matter if students and academics of the MUP, or researchers, scholars and politicians from the UK. Brexit will be a huge struggle for all parties involved in the process. On the other hand, it can be also viewed as an opportunity to study very practical and real issue, which almost no-one predicted, few people really understand and everyone now talks about.  Well, neither our MUP academics could forecast that the UK would actually want to leave but then timed the discussions on the same days as the negotiations started and invited speakers, who might have decisive impact in the actual process. Was it just a coincidence? Maybe not.