Úvod Rubriky Aktuálně Borders in the Americas: Processes of bordering and identification in the Americas and their historical, cultural, political and security implications 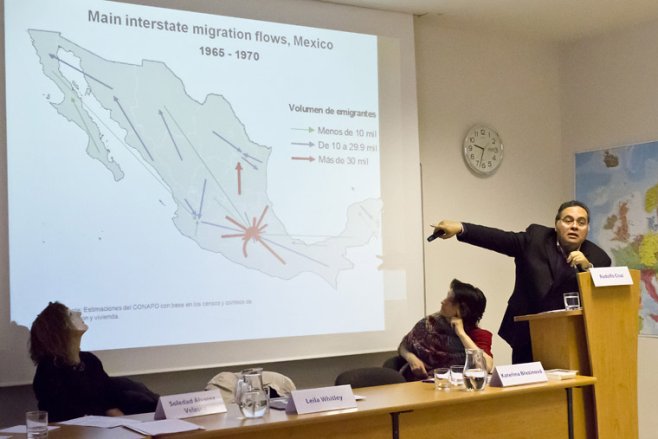 Borders in the Americas: Processes of bordering and identification in the Americas and their historical, cultural, political and security implications

As recent world events remind us, borders are far from being fixed and uncontested. While the processes of globalization and traffic of commodities, persons and capital might deem them less effective, they maintain acute relevance as a source of identification for citizens, or as territorial frameworks for action by national governments.

Contributions and debates within 2014 “Borders in the Americas” conference of Ibero-american Center at MUP proposed to analyze processes of bordering and identification in the Americas and their complex, political, cultural and security implications. Invited papers focused on both the 20th - 21st century challenges to borders and identities in the Americas brought about by increasingly transnational processes of migration and cross-border exchange in the Western hemisphere, as well as on the historical relationship between the construction of national borders, identities and citizenship in the Americas.

The first panel entitled ‘U.S.-Mexico Border’ was chaired by Dr. Katerina Březinová, head of the IAC and the main organizer of the conference. It opened with a keynote speech pronounced by Dr. Rodolfo Cruz from El Colegio de la Frontera Norte in Tijuana, who focused on Mexico’s Northern border in light of the changing dynamics of U.S.-Mexican migration. His observations included recent findings on border enforcement and deportation policies and their multi-layered impact experienced by Mexico. The second speaker of the panel, Leila Whitley from Goldsmiths University of London theorised and critically assessed the racial profiling of unauthorized immigrants within Arizona’s law SB1070, as well as a shifting nature of border that is no longer spatially bound to the geography of the border itself. The third speaker of this panel, Soledad Álvarez Velasco from King’s College London reported on undocumented transit migration through Mexico-USA corridor based on her field research, and pointed out the multiple implications that the concept of these flows as “national security threats” means for the insecurity of transit migrants and “justifies” multiple forms of social and state violence exerted against them.

The second panel ‘Culture and Borders in the Americas’ was chaired by Dr. Markéta Křížová from the Center for Ibero-american Studies of the Charles University, a co-organizer of the conference. Opening speech by Dr. Christina L. Sisk from the University of Houston focused on the cultural representations of Mexicans in the U.S. The second speaker, Tereza Jiroutová-Kynčlová from Charles University in Prague and Metropolitan University Prague analyzed the violence targeting women in Ciudad Juárez / El Pasothrough A. Gaspar de Alba’s novelDesert Blood. It was argued that this form of violence, directed at women workers of maquiladora industry, was a result of a socio-economic system of structural inequalities pertaining to cultural and social backgrounds, class, race, gender, and citizenship. The third paper by Dr. Markéta Riebová from Palacký University in Olomoucexamined the borderland cartography of the city of Los Angeles as reflected through the novel Their Dogs Came with Them by H. M. Viramontes by focusing on three interrelated vectors: the city border, the human border, and the literary border. The last speaker of the panel, Dr. Mihai Mindra fromthe University of Bucharest, analyzed the linguistic and political borders in Dominican Republic – U.S. as read in The Brief Wondrous Life of Oscar Wao literary rendering by Junot Díaz.

The third panel, ‘The Challenge of Separatism and the Sacrosanctity of Borders‘ was dedicated to the broader aspect of theorization of border studies.  The keynote speaker, Dr. Jaume Castan Pinos from the Department of Borderland Studies at the University of Southern Denmark presented his research on the issue of separatism and the supposed sacrosanctity of borders. Using several case studies of the current separatist movements, Dr. Castan Pinos discussed the principal conditions for the emergence and development of the secessionist movements. Chaired by Anya Gromilova from Metropolitan University Prague, the ensuing debate questioned reasons behind the fact that secessionist conflicts are largely absent in the region of the Americas.

The fourth and last panel entitled ‘Indigenous People and Borders in the Americas’ had two distinguished speakers:  Louise de Mello from the Universidad Pablo de Olavide in Spain, and Dr. Daniela Pěničková from Charles University in Prague / Anglo-American University. While de Mello’s research on interethnic relations, identities and worldview in Upper Madeira region located in South-Western Amazon in the 19th century focused on historical evolution of identities of indigenous people in a part of what is Brazilian territory today, Pěničková spoke about her ethnographic research in Apache communities in the U.S., presenting her finding related to the history, identity, and sustainability of Southwest Indigenous Communities. The ensuing debate led to a long and fruitful discussion about the physical and imaginary borders in the Americas, but also about the importance of academic research and its applicability, as well as the role of academics in the society. Some of the key problems for which a solution is pending were discussed, drawing from all presenters of the day. Thus, an inspiring intellectual exchange was achieved among the speakers and numerous audience, which made everyone conclude that the event was a success.

In connection with the conference, a virtual exhibit of photographs with content related to the topics of borders in Latin America was presented by Lucia Arguellová of Metropolitan University Prague.

The conference “Borders in the Americas” was organized by Ibero-American Centre (IAC) at Metropolitan University Prague in cooperation with the SIAS Center for Iberoamerican Studies of the Faculty of Arts, Charles University Prague.