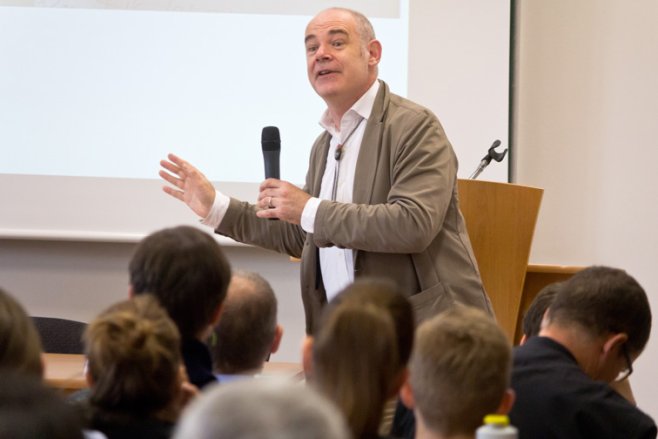 10. 11. 2017 Authors: Michal Kolmaš and Mária Strašáková At the beginning of November, nearly eighty fans of Asia came to listen to presentations dedicated to Asian conflicts by leading world and Czech experts at the 9th Conference on Asian Studies organized by the Department of Asian Studies at the Metropolitan University Prague.

The conference, which focused on the reflection of conflicts in Asian politics and culture, attracted academics, among others, from the United States, Japan, Romania, or Austria. Altogether, the conference offered almost twenty-five contributions to the themes of the conflict potential of China's growth, the militarization of contemporary Japan, the transformation of political violence in Indonesia to the reflection of the conflict in Indian literature and film.

This year the keynote address was presented by one of the most leading specialists on South East Asia, Professor Duncan McCargo, who is affiliated with the University in Leeds and Columbia. He spoke of the long-standing conflict in southern Thailand, which – although internationally overlooked – has already claimed more than 6 500 victims. Among other contributions, it is worth mentioning the analysis of the Chinese strategy in the South China Sea by Alfred Gerstl and Padraigh Lysaght of the University of Vienna.

All contributions sparked a lively debate and great interest from the participants. All the lecturers subsequently accepted the Metropolitan University's invitation to a dinner.

Metropolitan University Prague hosted the SCOM meeting of the MELIA Observatory project Since 2020, MUP team led by prof. Ladislav Cabada is a partner of the international project MELIA Observatory, which is dedicated to improving the level of media literacy, especially among children and students. The project partners from the countries of the Danube region meet every six months at the SCOM Meeting to discuss the progress of the project and its further development. However, the 4th SCOM Meeting was exceptional in that it was the first time that the project could be held in person.

LibertyCon – the Largest European Conference on Liberty The largest world liberal student organisation Students for Liberty hosts the annual multiple-days conference LibertyCon where students and amazing speakers from all over the world meet. Their aim is to emphasize liberty and enthuse young people to seek a liberal future. This spectacular event takes place in a different venue every year, now it came back to Prague after 5 years and Metropolitan University Prague was one of the partners.
přejít do rubriky