Metropolitan University Prague invites students, employees, and friends of the university to the IVth Annual MUP Gala Ball held on 3 April 2012 in Prague in the Žofín Palace (Slovanský Ostrov). 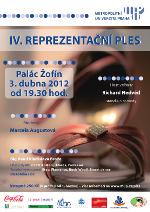 There is truly much to look forward to this year! The programme will span across two halls of the Žofín Palace. The Big Band of Vladislav Brož will provide accompaniment for standard dances in the Large Hall. Atarés will perform the rhythms of Latin and Cuban music in the Knight’s Hall, which will later ring with Ska and reggae performed by CCTV Allstars. If you harbour a nostalgia for the old times, take a moment to listen to the songs of the 60s and 70s, and become the king or queen of the rock 'n' roll dance floor.

The main guest of the evening will be Richard Nedvěd, a professional magician and stand-up comedian whose magic and gags are highly interactive, which is a guarantee that you will have a great time.

You can look forward to a dance performance, a generous raffle, and interesting prizes. The premises of the Žofín Palace are barrier-free.

Tickets will be available for purchase from 1 March at the following locations:

Students in MUP University Centres in Liberec, Pilsen, and Hradec Králové can reserve tickets at the respective Student Services offices in advance.