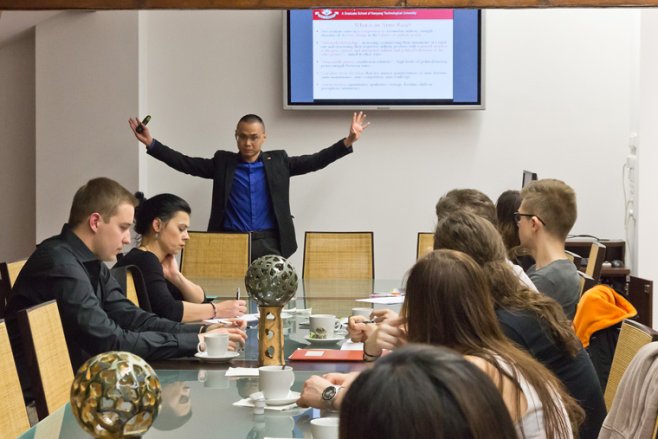 On 5th and 6th November 2014 the Department of Asian Studies and the Centre for Indo-Pacific Studies organized two lectures of Dr. Ong Weichong on the topic "Arms Dynamics in the Asia-Pacific".

In his lectures, Dr. Ong Weichong covered defense spending in Asia in the last two years as it has outstripped that of Europe. The seminar series aimed to address the question whether it was a sign of a regional arms race or whether Asian countries were merely leveraging on their economic success to modernize their militaries. Dr. Ong Weichong also examined the patterns of military procurement and arms dynamics in the Asia-Pacific region and addressed the implications of the aforesaid defense acquisition trends on both regional and international security – particularly their relevance to Europe.

Dr. Ong Weichong also provided an interview to Petr Zlatohlávek from the NATO Information Center in Prague. For the interview see: http://www.natoaktual.cz/ministat-s-maxi-armadou-proc-singapur-bojuje-s-al-kaidou-a-islamskym-statem-16e-/na_zpravy.aspx?c=A141123_222944_na_zpravy_m02

Ong Weichong is an Assistant Professor at the S. Rajaratnam School of International Studies (RSIS), Nanyang Technological University. He is attached to the Military Studies Programme at the school’s constituent unit, the Institute of Defence and Strategic Studies (IDSS). He is coordinator of the Asia Pacific Programme for Senior Military Officers (APPSMO), a summer programme for senior military officers (OF-5 to OF-6) from the Asia Pacific region and beyond.
He is also Course Director of the Campaign and War Studies (CWS) and Operations Other than War (OOTW) modules at the Goh Keng Swee Command and Staff College (GKS CSC), Singapore. He has also taught at the advanced school and officer cadet school levels at SAFTI Military Institute, Singapore. In national service, Weichong is a Functional Specialist Support Staff Officer (Army) with the Singapore Armed Forces. In addition, he was an Affiliated Researcher with the Department of Leadership and Management, Swedish National Defence College and a Guest Professor at the Ecole Navale, France.
Weichong completed his doctoral studies with the Centre for the Study of War, State and Society, University of Exeter, UK in 2010 where he was a recipient of research grants from the University of Exeter and the Royal Historical Society. Weichong’s articles, commentaries and op-eds have been published in the journal and magazine of the Singapore Armed Forces (Pointer and Pioneer); RUSI Journal; Armed Forces and Society; Defence Studies; Australian Defence Force Journal; Straits Times; Today; Lianhe Zaobao; Berita Harian; Defense News; Khaleej Times; RSIS Commentary Series; Canadian Naval Review; and Diplomatie.