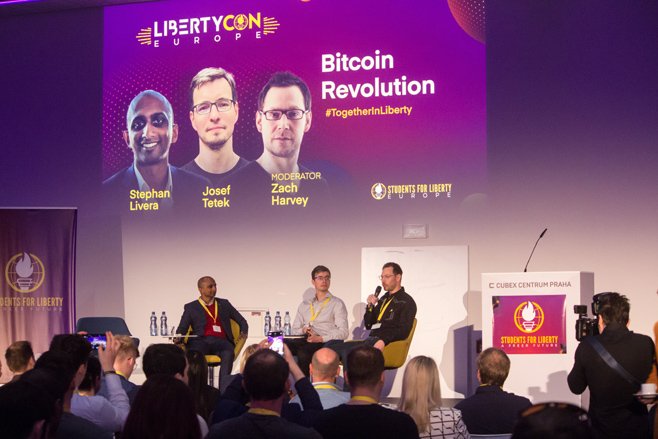 The largest world liberal student organisation Students for Liberty hosts the annual multiple-days conference LibertyCon where students and amazing speakers from all over the world meet. Their aim is to emphasize liberty and enthuse young people to seek a liberal future. This spectacular event takes place in a different venue every year, now it came back to Prague after 5 years and Metropolitan University Prague was one of the partners.

The first day of LibertyCon took place in Cubex Centre in several halls simultaneously with lectures and open debates with students – including MUP students – about the philosophy of liberty. The topics covered, for example, the role of the government in a liberal society, technology, authoritarianism in Eastern Europe and Russia, Bitcoin, approach to the pandemics and other challenges that Europe is currently facing. There were many important speakers from specialised fields but there was also an (online) speech by Sviatlana Tsikhanouskaya, a Belorussian opposition presidential candidate from the 2020 elections, or Leszek Balcerowicz, a former Polish vice-PM. The head of the Department of International Business of Metropolitan University Prague professor Josef Šíma with Martin Urza appeared on the panel called “The path to a liberal future”. During the debate, prof. Šíma also presented his new book Against the Flow – Talks about Liberty, Respect to Humans, Economics and Money.

During the whole day, Cubex also simultaneously hosted Liberty Fair – an exposition of liberal organisations from all over the world. Metropolitan University Prague also had its stand there.

On the second day, the event transformed into a festival in Radlice Cultural Sport Centre where guests enjoyed music, movie projections and stimulating debates of activists from various parts of Europe. Despite the initially unpleasant weather, the event was a great success.

Sustainability – roundtable/discussion On March 22, 2022 was organised the first round-table of the Department of Financial Management Metropolitan University Prague in cooperation with the professional organization the Association of Chartered Certified Accountants with title SUSTAINABILITY. The event was organized in a hybrid format in university premises. There were about 60 participants connected online and nearly 20 participants and students present personally in the room.

08/06 2022 Research presentation and the experience with international mobility We would like to invite you to a roundtable about the research and administration of international mobility program "International Mobility of Researchers at Metropolitan University Prague II". It will consist of two short presentations of research done during the secondment periods, and a discussion about the benefits and perils of international mobilities. 15/06 2022 Day of Open Doors Metropolitan University Prague invites prospective applicants to participate in the Day of Open Doors. 06/10 2022 IFRS: Global Rules & Local Use – Beyond the Numbers School of Business Administration at Anglo-American University and Department of Financial Management Metropolitan University Prague organise jubilee 10th edition of International Scientific Conference "IFRS: Global Rules & Local Use – Beyond the Numbers".
Go to Calendar
This website uses cookies to analyse viewer activities. By continuing to browse it, you agree to their use. Learn more.
Information about Data Protection is available in the Czech language here.